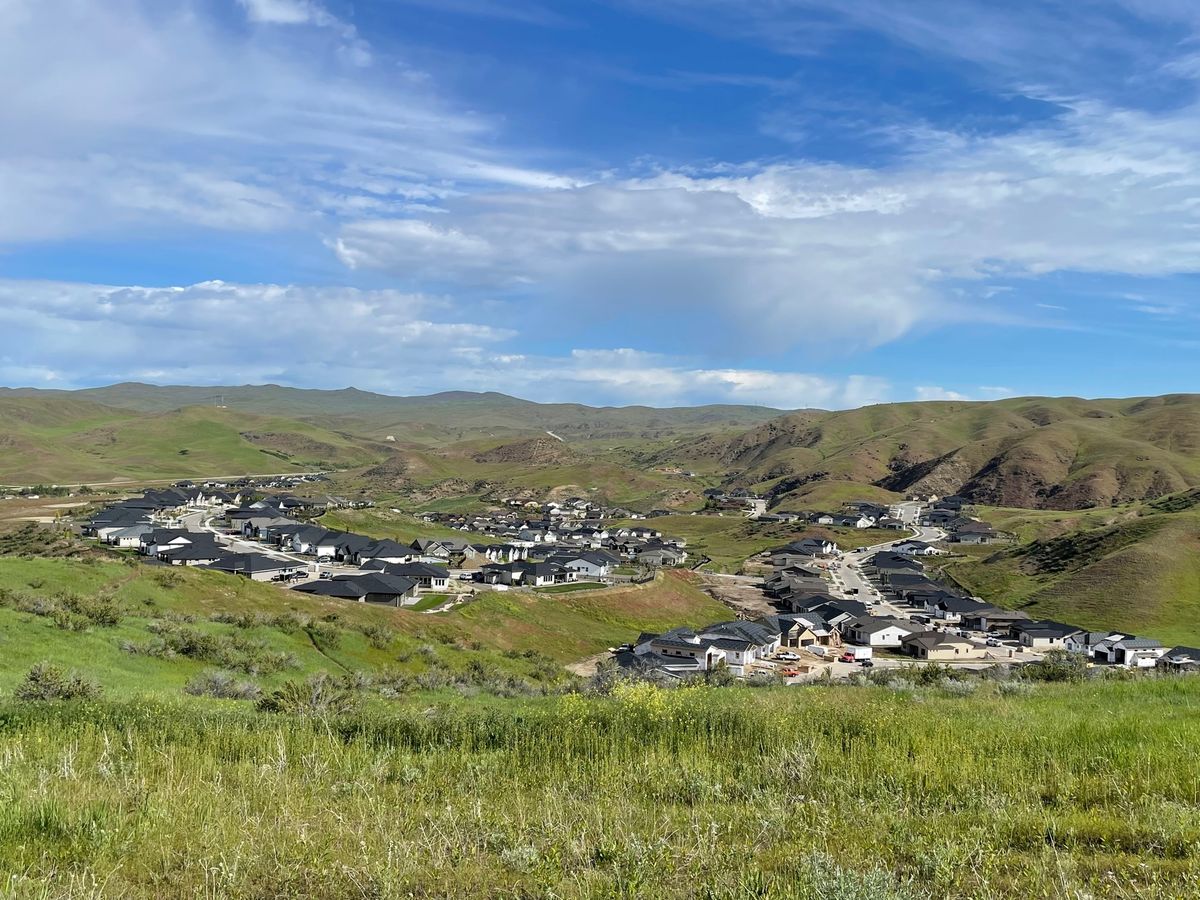 For more information or answers to additional questions about the Avimor annexation proposal, contact us at: info@avimor.com

Benefits of Annexation for City of Eagle and Avimor residents

Why does Avimor want to be annexed into the City of Eagle? How would annexation impact current residents of Eagle?

The owners of Avimor, the McLeod family, have owned the property since 1916 as a family ranch. They have allowed their land to remain publicly accessible with abundant open space and wish for any housing development to have a small-town feel. Annexation is the only way to avoid the risks of having to pursue a piecemeal development approach. Annexation into Eagle would enable the Avimor community to pursue a more intentional and thoughtful community planning strategy with one agency. There’s only one shot to develop Avimor and we want to get it right.

Avimor residents are already using roads and fire services in Eagle. Annexation would leverage Avimor’s growing tax base and would ensure the community pays its fair share. Annexation would also make it easier to share Avimor’s amenities and resources with Eagle residents including open space and trails, excess water, space for local events, and school sites.

If Avimor is annexed into Eagle, how will it impact the city’s economy?

Annexation allows for the planned development of Avimor with predictable growth over time. Avimor will spread development over several decades and create an average of 2,493 jobs annually over the life of the project and at completion there will be approximately 914 permanent jobs created by Avimor. If Avimor is annexed into Eagle, the City would receive revenue from impact fees, permitting, and other development costs. Idaho is growing and cities need to decide how they will incorporate new residents and neighborhoods. Eagle can benefit from the taxes and other fees that Avimor will pay or miss out on this revenue opportunity and other benefits.

An independent economic impact study showed that annexation would result in a net positive fiscal impact for the City of Eagle for 30 years, under current fiscal policy. Additional positive impacts from annexation were outlined in the report including a $11 million in avoided cost for residents since Avimor will pay for improved parks and pathways, and $191 million from over 9,500 acres of open space donated by Avimor.

There is concern that expanding development in Avimor will reduce community access to open space. How will annexation impact open space availability?

Avimor lands are private lands and will remain so until such time as they are developed, and open space is set aside. The McLeod family has been gracious enough to allow the public to use these lands over the years at great cost and inconvenience. However, their vision has never faltered – even in the face of these challenges – and it’s their desire to continue to allow public access of their lands for outdoor enjoyment.

If Avimor is annexed into the City of Eagle, it will help further preserve open space as the City and Avimor have similar visions in this aspect. It will also ensure that the city and its residents are able to build out the current trail and open space plan as conceptualized.

With this annexation proposal, Avimor has committed to designating at least 50% of the community to open space for the public. The result would be nearly 10,000 acres of open space including several 100 miles of trails for hiking, biking, horseback riding, and more.

Where will Avimor students attend school? How will annexation into Eagle impact school districts?

Avimor’s boundaries spread across three separate school districts: West Ada, Horseshoe Bend, and Emmett. Avimor is committed to donating a school site in each district upon request from district officials. Avimor has already entered agreements to donate a 5–8-acre school site to Horseshoe Bend and a 7–10-acre school site to West Ada. Regardless of the annexation outcome, the property taxes from Avimor residents will go to the school district where their home is located.

Additionally, Avimor has agreed to also donate a school site to the Novus Classical Academy. This is a public charter school that will be an open enrollment school to not only Avimor residents but City of Eagle residents. If all goes well, they hope to open doors in 2024.

What kind of impact or consequences will Avimor’s annexation into Eagle have on Eagle’s water supply and its current residents?

Avimor is currently served by the City of Eagle water system. As a result, annexation will not have any impact on the city’s water supply or residents. Under an agreement approved by the City Council, Eagle will provide water service to Avimor. Avimor will construct the municipal system to provide water to future development areas. Once this system has been constructed, it will be given to the City of Eagle at no cost to the current residents.

Avimor anticipates having more than enough water to accommodate it planned growth. This is due in part to Avimor’s current and continued commitment to water conservation. Studies show these measures enable Avimor residents to use 45 percent less water per home than the average home in the Treasure Valley.

Will Avimor’s annexation have any impact on the City of Eagle’s wastewater treatment facilities and rates for residents?

No. Avimor has its own, separate wastewater treatment facility. This facility was designed and built to serve all 23,000 acres of Avimor and its planned housing and commercial buildout. The facility also treats the wastewater to meet IDEQ standards for re-use irrigation, something now being done in common areas across the development.

What kind of impact would annexation have on the current level emergency services?

Fire: The entire Avimor footprint currently falls within the broader boundary of the Eagle Fire District. To reduce the burden on the Eagle Fire Department, Avimor has also developed a Fire Management Plan to mitigate potential fires. Additionally, Avimor was the first community from conception to become a Fire Wise Community. This means that each home is built to Fire-Wise Standards, an additional layer of design to reduce the potential for fire.

EMS: Emergency services for Avimor that fall within Ada and Boise counties will be served by to Ada County Paramedics. The portion of the property that falls within Gem County will be contracted and served by either a private or public provider.

What are the plans for locating a Fire Station closer to Avimor, and will those agencies servicing Avimor have any impact on response times to Eagle residents?

Let’s break this down.

First, Avimor has pledged to donate a 2-acre parcel within its boundaries to the Eagle Fire Department that will be home to a new facility for first responders, Eagle Police and Ada County Sheriff deputies. Avimor will pay city impact fees in accordance with the City of Eagle’s policy.

Where will the new facility be located? Who pays for construction?

A new facility will be built within Avimor’s boundaries at a time determined by the Eagle Fire District.

Starting in 2014, Avimor entered a voluntary agreement with the Eagle Fire District to pay a $500 mitigation fee for each new home with the goal of creating a fund for a new facility. In 2020, Avimor agreed to begin paying a $900 impact fee that the Eagle Fire District now collects on new residential and commercial developments falling within the District’s boundaries. Money from these fees is used at the District’s discretion.

Traffic flow in Eagle and the surrounding area is getting increasingly congested. How will growth in Avimor impact traffic through the buildout of the project?

Rapid growth across the Treasure Valley has impacted traffic flow for years and will continue to do so as more people move here. Avimor has been extensively studying traffic and collaborated with state and county transportation leaders to design a series of new roads and infrastructure to mitigate the impacts that will come from Avimor’s expansion.

Some of those mitigation details are still being negotiated with state and county transportation agencies. But Avimor is also taking steps to address traffic on State Highway 55. For example, in 2023 Avimor anticipates building an interchange at the north end of the development to facilitate easier access for motorists seeking to get on or off the state highway.

Avimor estimates, based on traffic studies, it will begin building a second interchange at the main entry, now controlled by a traffic light. The project could also include moving the highway to the west and widening the lanes.

As Avimor expands the number of homes in its boundaries, there are also plans for commercial and business growth. This means additional traffic impacts for people who live there and travel to Eagle for services, work and goods, but also an increase in people commuting there for work. Won’t commercial and businesses add to the region’s traffic congestion?

Avimor is a planned development community that has been designed to include commercial and retail opportunities to mitigate the amount of traffic coming and going from the development. This concept, called trip capture, has been implemented in mixed-use developments across the country.

The commercial, retail and recreational properties planned to support the needs of Avimor residents will reduce the need to travel outside the development. Avimor already has a convenience store and restaurant. We are finishing plans for a coffee shop, doctor’s office, design center, veterinary and our offices. We have also had inquiries a chiropractic clinic, bike shop owner and physical therapy provider. Our community centers will provide gyms, an indoor pool, library annexes and meeting rooms.

Many of Avimor businesses have employees who live in the Community, which helps to further reduce trips outside the community. All these amenities and services are designed and proven to increase trip capture – or in other words, reduce the need for people to travel elsewhere for these goods and services. In recent years, multiple studies to measure trip capture have shown that Avimor has less than 50 percent of the trips from its residents than other homes in the County. With the added services in the future, Avimor projects trip capture will improve even more.

What will happen if Avimor is not annexed?

Avimor will continue to develop, albeit in three different jurisdictions – Ada, Gem and Boise counties. We do not believe a scenario in which Avimor’s growth is determined by three separate counties is the best fit and approach for the community as a whole. This would ultimately mean three different visions for the development and handing over control of the foothills design to these jurisdictions. This also means that the City of Eagle would not have a say in what goes on as Avimor continues to grow in the foothills north of the city.